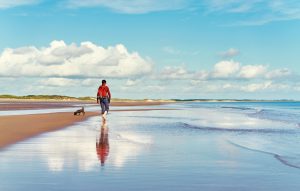 With just over 400 people living there, Bamburgh is a peaceful location. Awarded a Blue Flag in 2005, it is also known for Bamburgh Castle, once linked to Sir Lancelot in the Arthurian Legend.

Surprisingly voted as one of the North East’s top surf spots, Bamburgh offers a popular location for water sports enthusiasts vying to catch a break while soaring kite surfers perform daredevil leaps above the waves.

Just a few miles off the Northumberland coast lies a small island and village with a wealth of history and intrigue. Holy Island is home to the 12th century Lindisfarne Priory, a tranquil setting from which some of the world’s most precious books, the Lindisfarne Gospels, were born. The priory was an important place for Christianity in Anglo Saxon times and once the home of St Oswald.

Looming over the sheer rock face at the highest point on the island is is Lindisfarne Castle, which was built in 1550 as a fort to defend the harbour against attack from Scots and Norsemen. In 1901, Edward Hudson bought Lindisfarne Castle and commissioned celebrated architect Edward Lutyens to give the castle a luxurious makeover, turning it into a holiday home. Today the National Trust look after Lindisfarne Castle so you can enjoy the fabulous architecture, stunning views and explore the restoration work that took place during 2017.

As well as its rich historical backstory, the Holy Island of Lindisfarne has an interesting array of wildlife. The Lindisfarne National Nature Reserve is made of protected tidal mudflats, saltmarshes and dunes which together form the Rare plants and an abundance of food supplies attract visiting birds from thousands of miles.

This picturesque walk, as recommended by the National Trust, begins in the beautiful village of Craster, passes Dunstanburgh Castle, and the long sweep of Embleton Sands before reaching Low Newton by the Sea. The trek will take around two hours, is six miles long and of moderate effort. Feel free to take a furry friend along too as dogs are welcome along this route, too.

On your travels you could explore the sheltered rockpools for eider duck, the Dunstaburgh Castle ruins, the rocky headlands a mile north of Craster and deserted bunkers from the Second World War. The route and the surrounding waters are also popular destinations for a number of wildlife, including shore birds and marine creatures including; sea anemones, limpets, crabs and starfish and seals often enjoy relaxing on the raised rocky areas.

4. Seahouses and the Farne Islands

Seahouses lies on the Northumberland coast about 15 miles North-East of Alnwick between the beautiful Villages of Beadnell and Bamburgh. This holiday Town and Fishing Port did not exist until 1889 when the harbour was built in order to improve the local fishing and lime industries. Seahouses is known to many as ‘The Gateway to the Farne Islands’ and is a very popular place with both locals and visitors. It is probably the most popular holiday resort on the Coast due to its excellent amenities and attracts huge numbers of visitors throughout the year.

Druridge Bay is a glorious seven mile-stretch of beach which runs from Amble down to Cresswell. With sand dunes and pools to explore this outstanding destination is incredibly popular for cyclists, walkers, horse riders and water sports enthusiasts.

Druridge Bay offers several nature reserves which are hidden behind its dunes. The 100-acre Ladyburn Lake is surrounded by woodland and meadows and offers the perfect setting for windsurfing, canoeing and sailing courses.

In the close by East Chevington and Cresswell visitors can spot resident and migrating birds including graylag, pink-footed geese, and grasshopper warbler.

Druridge Bay Country Park offers a range of amenities to ensure an enjoyable trip to the coast including toilets, cafe and children’s play area. The park is centred on a lake with surrounding meadows and woods which have been restored from an old opencast coal mine and is maturing into a very pleasant landscape for walks and picnics.